A VALUABLE BOOK FOR ALL CHRISTIANS

Dare to Doubt is a guide for new Christians to establish a strong Foundation on which to grow and mature as a Christian.
The concepts contained are traditional, conservative and sound.
The book would be a valuable asset for any Christians library.
It is available through AMAZON

Dare to Doubt is also available through your favorite Bookstore. 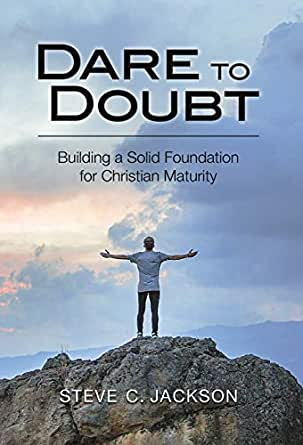 I was born in the  to a traditional family, my views tend to be both traditional and conservative. I am a Christian by family background and a follower of Jesus Christ by personal choice.

I flunked out of one school (Georgia Tech - Mechanical Engineering), graduated from another(    - Political science) and completed the course work for a Masters degree at another(  - Political Science). This experience taught me a valuable lesson. Enjoy what you are doing or you will not do well at it. I wish I had taken that lesson to heart early on.

Spiritually, I was raised in and spent most of my early years in the . I was christened  as a baby, and latter baptized by sprinkling as a young 10 year old in the Presbyterian Church. Currently, my wife and I attend a Southern Baptist Church. In February, 2011, I was baptized by immersion so that I could pursue my faith more fully in that particular church.  It's a long story I will gladly share but not now.

As a United Methodist, I taught Sunday school for twenty years to a group of young adults, at least we were young when we started.  At the end of that time, I began working as a part time pastor, initially as one of two Pastor in five small rural Methodist Churches in Middle Tennessee. Later I had sole responsibility for two  small churches. I was a pretty good pulpit preacher but a lousy administrator, hated paperwork and reports. I was an okay pastor to my congregations, but because of the distance (an hour to the first church) and the time commitment, I could not visit as much as I should and did very little in evangelism.

My greatest moment as a spiritual leader came when I baptized my brother who was dying of cancer. Perhaps, God lead me to be a part time pastor for that single moment when a dying man was saved. It gave him a hope of a life eternally in The Father's presence.

Many non-Christians say, "If Christians can’t agree, then why should I believe them? Christianity has hundreds of closely held positions of various tenants of the faith. Is baptism necessary, what form should baptism take, should women be allowed to lead a congregation of worshipers, what about musical instruments in worship, which translation of the Bible is the “true” word of God, what is the nature of God, should the Bible be read literally, is the earth only 5000 years old, were Adam and Eve real people, and on and on. No wonder there is confusion.

I had many of these same questions. So I decided to explore just what I do believe. What are those things about which I have no doubts? What are the things that logic, facts, threats or any other forces can not change? I began a blog looking at these very personal spiritual questions. (www.christianity100.com) Out of that blog and those struggles with doubts came Dare To Doubt. I discovered I could have healthy doubts and still be assured God loved me and that even with doubts, I was still part of His family.

Hopefully, as you read this book it will lead to asking yourself, “What do I believe, really believe?” In the final analysis, your actions will be determined by what you truly believe and not what you profess to believe. And that’s the real question, isn’t it? It is important to know what you believe and why!

God Bless you on your journey.

A copy of Dare to Doubt, signed by the author is available through this web site for $9.95 plus shipping and tax.